Our lighting amnesty got off to an excellent start on Saturday with an event in Tomintoul. We celebrated International Dark Skies week with an offer to replace local residents outdoor lights with dark sky friendly ones.

If anyone in the proposed Dark Sky Park area has an outdoor light that allows excessive light to spill into the surrounding countryside and night sky then a free replacement unit can be obtained from the Landscape Partnership office in Tomintoul.

Download our Lighting Amnesty Leaflet to find out more. 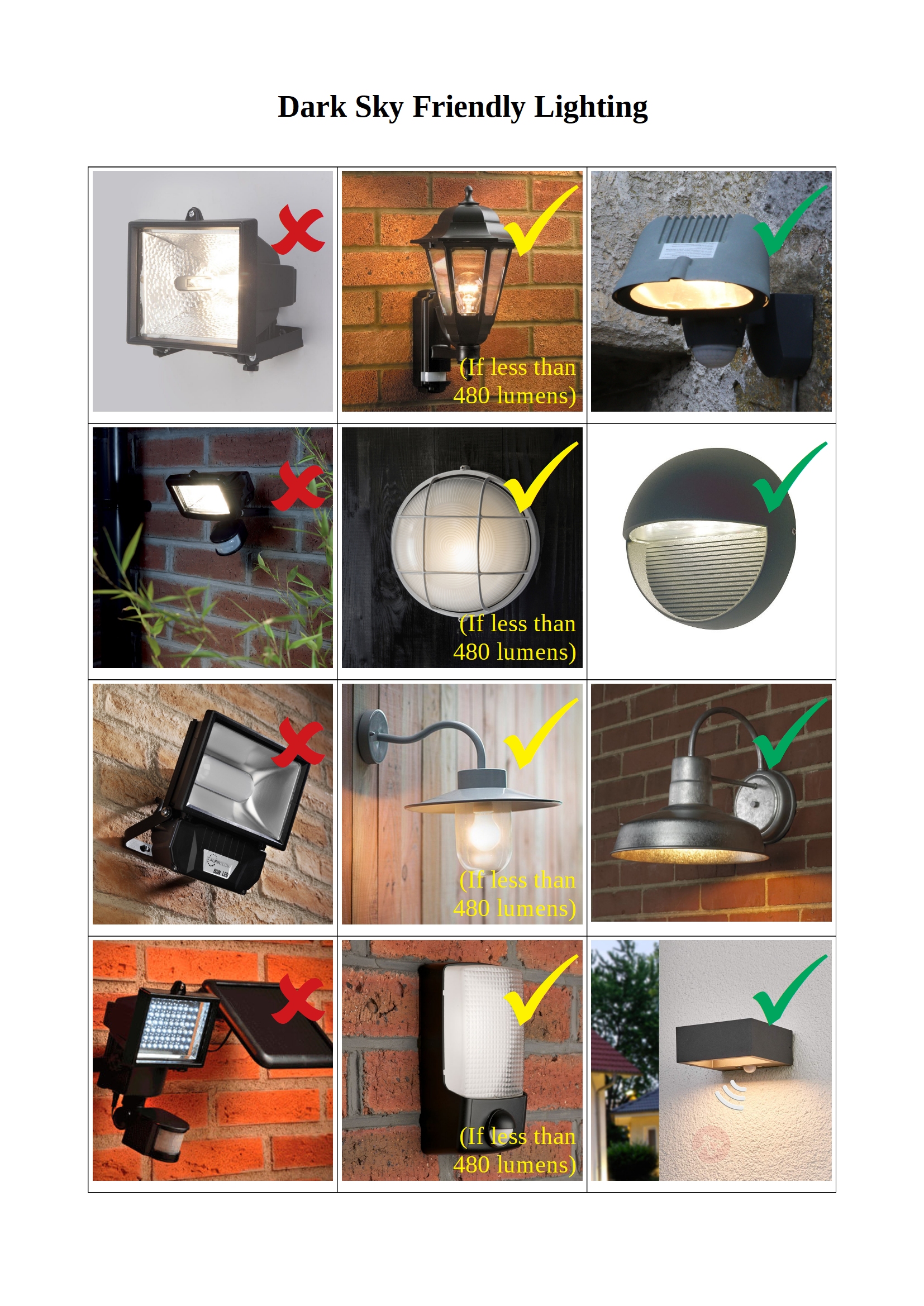 To find Leo start at our old friend the Plough and follow the two pointer stars in the opposite direction from the Pole Star. Just under a quarter of the way across the sky look out for a group of stars shaped like a backwards question mark.

This is the Sickle – the head of Leo the Lion. The star at the bottom of the question mark is Regulus, his shining heart and one of the brightest stars in the night sky. 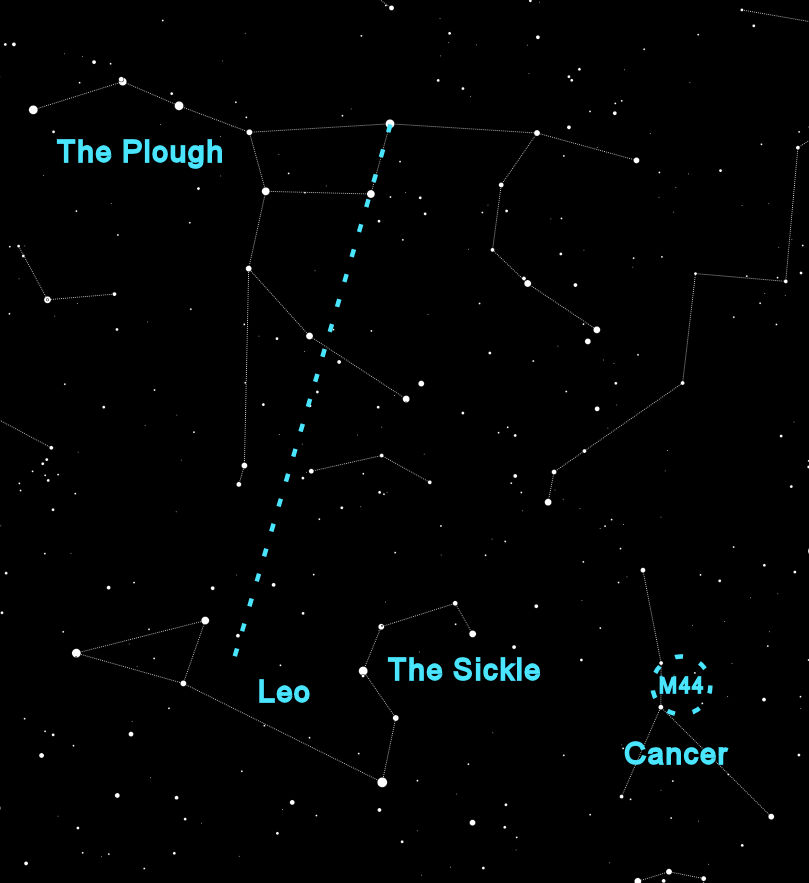 In Greek mythology, Leo was said to be the Nemean Lion, killed by Hercules during the first of his twelve labours. The Nemean Lion would take young women as hostages to its lair in a cave. Warriors from a nearby town had all been eaten in their attempts to rescue them because the lion’s hide was proof against all known weapons. Hercules quickly realised that in order to defeat the Lion it was going to be a bare knuckle job. Slipping quietly into the cave Hercules engaged it at close quarters. As the Lion pounced he grabbed it in mid air, catching the Lion’s forelegs in one hand and it’s hind legs in the other. Bending it backwards he broke its back and freed the trapped maidens. Zeus, chief of the Greek gods commemorated his efforts by putting the Lion in the sky.

Move 25 degrees west from the centre of Leo (the distance between your outstretched thumb and little finger at arm’s length) and look for a fuzzy patch. This is the Beehive cluster in the constellation of Cancer the Crab.

The Beehive cluster looks like a nebulous patch of light to the naked eye under dark skies. Through binoculars it looks like a swarm of bees buzzing round a hive. It has been known since ancient times and is sometimes called Praesepe meaning “the manger” from Latin.

Also known as Messier 44, the Beehive is one of the nearest open clusters to the solar system. Even so the light that we see today started on it’s way here during the Wars of the Roses. The Beehive contains around a thousand stars – more than most other nearby clusters.

During Hercules’ epic battle with the multi headed Hydra, Hera sent Karkinos the crab to distract him. However quick witted Hercules swiftly dispatched the crab by kicking it with such force that it ended up in the sky. Hera gave Karkinos a permanent place in the starry heavens in gratitude for it’s efforts.

On Saturday January 13th visitors to the Richmond Hall in Tomintoul were treated to a virtual trip up to the international Space Station and then on to the edge of the solar system.

Later on others were taken on a hunt for Dark Matter and given an in depth view of the skies and constellations above Tomintoul.

Cosmos Planetarium provided this unique immersive 3D experience for over 150 enthusiasts in their state of the art planetarium.

To find the Charioteer first of all find the Plough. Then draw a line through the upper two stars of the Plough away from the handle to find the bright star Capella and the constellation of Auriga. The five main stars of Auriga are sometimes called The Pentagon because of the shape they make in the night sky.

In Greek mythology, Auriga is identified with the hero Erichthonius. Erichthonius was the inventor of the quadriga, the four-horse chariot, created in the image of the Sun’s chariot. It was this chariot that helped him win the battle for Athens. Subsequently Zeus put him in the night sky in recognition of his ingenuity and heroic deeds.

Traditional illustrations of Auriga represent it as a charioteer. He holds a goat over his left shoulder and has two kids under his left arm. The Greeks associated Capella with the mythological she-goat Amalthea, who breast-fed the infant Zeus. Just under Capella there is a small triangle of stars known as the Kids.

Open star clusters are formed from the same molecular cloud and bound together by gravity. They usually only survive for a few hundred million years. After that they break up following close encounters with other clusters and clouds of gas as they orbit the Milky Way.

Almost any pair of binoculars will allow you to spot the Auriga clusters as faint patches of light against the background stars of the Milky Way.

The Pinwheel cluster (Messier 36) is the youngest of the three clusters at 25 million years. It can be found just to the east of M38 within the same binocular field. There are over 60 stars in this cluster which lies about 4,300 light years away from Earth.

Messier 37 is the brightest of the three clusters and is one binocular field to the east of M36. It contains over 500 stars and is between 350 and 550 million years old.

Messier 38 is called the Starfish Cluster because of it’s conspicuous “X” shape as seen through a telescope. It can be found just to the west of M36. It is about 4,200 light years away and around 220 million years old.

Chivas Brothers have got us off to an excellent start by switching off up lighters at their Braeval Distillery. It is making a massive improvement to the night skies over Chapelton and Scalan.

There is an amazing difference in the sky quality over Tomintoul now that almost all of the street lighting has been replaced.

Last night an hour with binoculars revealed a huge array of deep sky delights from the Field of Hope at the junction of the A939 / B9008. To the naked eye the sky was absolutely studded with stars and the Milky Way showed great detail. There was even a hint of the Aurora in the north to complete the experience.

A big thank you to the Moray Council for making such a huge difference.

During the early evenings of September the Summer Triangle lies high in the south. In October it is to the south-west and by November it is in the west. To find it first look for the brightest star in the sky. That is Vega in the constellation of Lyra. Next look to it’s left to find Deneb in Cygnus. Finally look below Deneb to find Altair in the constellation of Aquila. These three stars form the summer triangle.

Altair is the brightest star in the constellation of Aquila. In Greek mythology, Aquila was the eagle that carried Zeus’ thunderbolts.

On a clear moonless night look just above and to the right of Altair in Aquila using binoculars. You should be able to spot a mysterious dark “E” silhouetted against the faint background glow of the Milky Way.

This strange shape is a dark nebula; a cold cloud of interstellar gas and dust, so dense that it obscures the light from the stars behind it. These dark nebulae are where new stars will eventually be born.

Barnard’s “E” is named after Edward Barnard (1857 – 1923), a Victorian astronomer who compiled a list of dark markings in the sky.

The Arrow and the Fox

The constellation of Sagitta (the Arrow) can be found just above Aquila. Although small, it was recognised as an arrow by several ancient civilisations including the Persians, Hebrews, Greeks and Romans.

Vulpecula (The Fox) lies just above Sagitta. Unlike many other constellations it has no mythology associated with it. Vulpecula was introduced by the Polish astronomer Johannes Hevelius during the late 17th century.

The eye and brain are excellent at seeing meaningful patterns in random collections of stars. Asterisms are obvious groupings of stars that are not one of the traditional constellations

The Coathanger is an unmistakable asterism despite being upside down! Find it about one binocular field to the north west of the western end of Sagitta. Although it’s stars appear to be close together, they are a chance alignment at very different distances from us.

A short distance to the east lies the Dumbbell Nebula. It is the biggest and brightest planetary nebula in the northern sky. Find it about half a binocular field north of the eastern end of Sagitta. It looks like a small faint planet just below the central star of a distinctive “M” shaped asterism.

A planetary nebula consists of an expanding shell of gas ejected from an old red giant star late in it’s life. They are relatively short- lived, lasting only a few tens of thousands of years, compared to a typical stellar lifetime of several billion years. They are called planetary nebulae because William Herschel thought that they resembled planets when viewed through his telescope in the 1780’s. The name has stuck although it is misleading.

Images by Jon Marcus and Petr Novak are licensed under a Creative Commons Attribution 4.0 International License.

We had a great meeting today at the Tomintoul Single Malt Whisky HQ about our Dark Skies of Tomintoul & Glenlivet project. It all helps to bring us one step closer to our (fingers crossed!) International Dark-Sky Association application to become the world’s most northerly Dark Sky Park.

The old sodium street lights at Chapeltown have now been replaced  with new full cut off LED lighting. This should make a huge difference to the amount of light pollution visible from Scalan and the surrounding area.

We had a great meeting last Thursday with representatives from The Glenlivet and Braeval distilleries. We are delighted that they have agreed to support us with our Heritage Lottery Fund Scotland Dark Skies project.

We will be working together to promote environmentally responsible lighting in the Tomintoul & Glenlivet Landscape Partnership area.

Reduced light pollution is beneficial for all sorts of reasons. Find out more on our Dark Skies Project page.